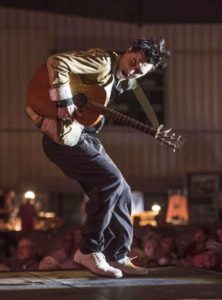 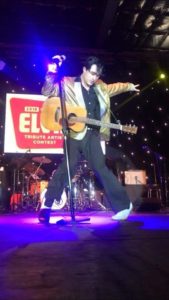 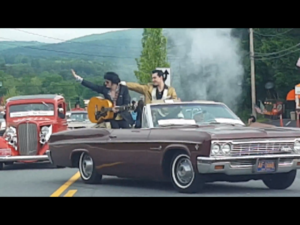 The quaint Adirondack town of Lake George, NY is absolutely consumed with the memory of Elvis Presley each May. Elvis fans and ETA’s ( Elvis Tribute Artists) gather from as far away as Japan to pay homage to The King, including my own performing son ! The towns cafes, boats,streets echoed with Elvis for a solid week, including main stage performances at The Forum. Hey, What’s not to love if you love Elvis and his fans and music. At the “ early years “ performance and compition, Calvin Bratcher kicked the whole thing off with a rousing version of The Kings “ Too Much”. To the fans delight , Calvin set the stage for an amazing week of fun. Calvin was to start and close the weekend with his short sets. He performed with an amazing band with a vast repitore of Elvis tunes. I can’t say enough about Calvin’s performance and first time effort. I particularly loved the support he received from all of the fans and fellow performers. Elvis fans are the best and most dedicated there are. Cal finished fourth overall and seems to be primed to bring home the gold next year. Some fathers and sons bond while fishing, watching baseball, for us it’s rehearsing in the hotel room and discussing the tunes we should be doing and preserving in our way, the memory of Elvis. Calvin was featured not only on the main stage but an ultra cool Elvis parade up Canada Street ending at The Forum where the action was. Right now, we decided on the wardrobe and era of Elvis we are to wear and perform for Elvis week 2019.