Reflecting on the Last 20 Years 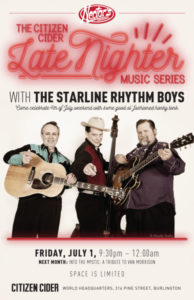 For 19 years my bandmates and I have followed our clients directions to the next show that have wound up in the most surreal, rural destinations imaginable.The settings have often been breathtaking, but as we traveled neath maple draped dirt roads it was often wondered by my trusty navigator Big Al, “Are you telling me a gig awaits at the end of this trip“?

We would pull up to barn dances in Peacham, weddings at a place called “#10“ Pond, an old opera house way up in “The NorthEast Kingdom”, Churches, Town Concerts in just about every paint peeling gazebo in The Green Mountain State. We have played spaghetti dinners for Bernie Sanders when he ran for Congress, we played for Rich Tarrent at his campaign stops when he was running against Bernie a few years later in a bid to capture the Vermont Senate seat. We have been hailed “Vermont’s House Band” by Vermont Magazine years ago.

As we move closer and closer to our 20th year as a Honky Tonkin/ Rockabilly band, quite a milestone, I would like to reflect down the road about the people we have met along our journey. One regret I’ve had was that John O’Brien the great Vermont Filmmaker didn’t join us on the road to capture those events. Although we got to play his beloved town hall in Tunbridge and hang on his farm as well as at Fred Tuttle’s house. It really would have made an incredible human interest story and documentary. In words on this blog I would love to share and introduce you to the people and places of Vermont that Danny Coane, Big Al Lemery and myself, Billy B have met and visited.

Until next time, keep swingin. We will ! BB