History of the Stella Gambler

A note sent to Neil Harpe who I purchased my Stella Gambler from: 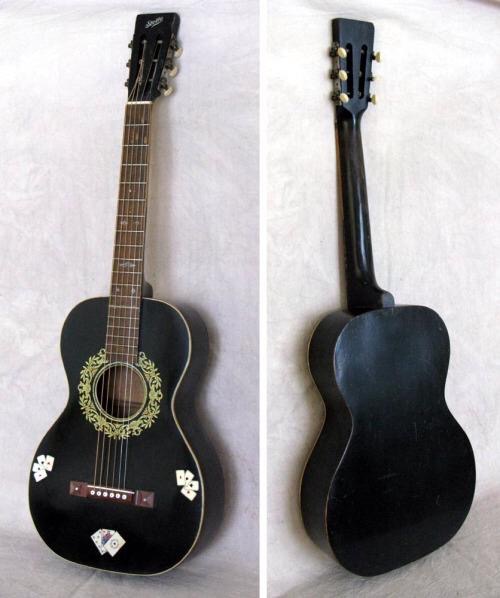 Neil,
I am thrilled to see my old guitar returned to such a beautiful condition. The pictures are wonderful.  My hope was that it would find a new life with someone who would love and enjoy it.  That has apparently been accomplished and I thank you so much.  The history as I know it is as follows:  The guitar came to me from my late Mother-In Law Mary Elmina Martin Bowman in Newkirk . Ok.  The guitar came to her from her sister Gladys.  Gladys was a minister of a very conservative Apostolic Church whose services were filled with music.  The whole Martin family were very involved in the ministry in Oklahoma and all musically talented.  Glady's son was Roland "Rosie” Rozell who sang lead tenor in such groups as "The Statesmen", "James Blackwood Quartet", and Bill Gaither Homecoming Video's.  His career took him further south and he passed away in Alabama in 1995.  He was inducted into the Southern Gospel Music Assoc. Hall of Fame in 1999.  It is the assumption of the family that the decals were removed because of there strong conservative religious beliefs.  I know the guitar had not been played for at least 50 yrs. and probably longer, as she passed away we believe in the Late 40's or early 50's.  Unfortunately I have no picture of her with the guitar.  I was wondering if you were able to determine an approximate age of the guitar? Once again I sincerely thank you for the beautiful restoration.
Sincerely,
Rebecca Bowman